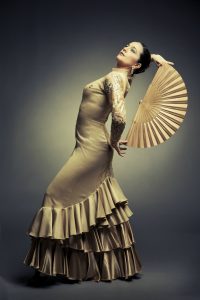 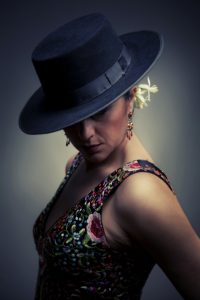 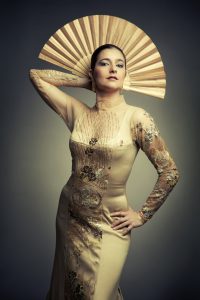 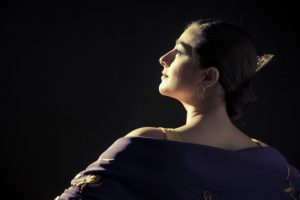 “A party is made up of three people:

one dances, one sings and one plays.

I had forgotten about those who say ole! and keep the rhythm playing palmas.”

In these words, Manuel Machado captured the essential elements of Flamenco: dance, song and guitar. This is also the primary objective proposed by the Ángeles Gabaldón Company in this performance: to return to the bare essentials in a search for simplicity in the roots of the “party,” the quintessential flamenco atmosphere.

This minimalist approach, however, is not the only thing that defines this staging: Ángeles Gabaldón has two additional objectives worth highlighting.

On one hand, she aims to showcase the use of accessories that have complemented flamenco dance over its history: the bata de cola, the Manila shawl, the Cordoban hat, and the castanets. These accessories impacted the era and their use, which has its difficulties and requires artistic dexterity, has been falling into disuse as flamenco dance has evolved with the times and modernized.

On the other hand, regarding the selection of dances and songs, Con Corriente proposes an overview of those palos, or styles, which, while they marked an important time period in flamenco, are currently “going out of fashion” and are not as frequently performed by artists today.

Con corriente is also, in a way, a voyage through the history of flamenco dance, a fresh approach to those times in which flamenco, first through the cafés cantantes and later from theater stages, started to depart from the environment of the private party to gain popularity and reach wider audiences.

In addition, this performance pays homage to the great figures of flamenco dance—to those dancers who, in their time, between the 19th and 20th century, made the dance evolve and developed the art of the use of the bata de cola, the Manila shawl, the castanets, the fan and other accessories used in flamenco dance. Dancers like Juana “La Macarrona,” who left her mark forever in the use of the bata de cola and the Manila shawl. Trinidad Huertas “La Cuenca,” who Fernando el de Triana cites as the first who danced with a man´s costume, with a short suit and hat. Rosario Monje “La Mejorana:” “the first who raised her arms high in the dance giving the female figure an extraordinary elegance,” according to Fernando Quinones, as well as “ La Malena,” “La Mejorana,” “La Coquinera,” and so many other legendary figures who laid the foundations of the now universal art which is flamenco dance.